Climate Stewards was set up by Caroline Pomeroy in response to the challenge of climate change. Caroline enables individuals, businesses, churches and other organisations to off-set unavoidable greenhouse gas emissions. Further information may be found on the Climate Stewards webpage. The following is an extract from the website describing work in Ghana where Caroline and her family lived and worked for a number of years: 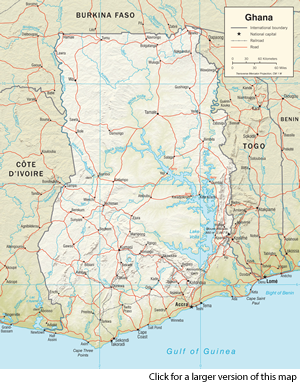 Around Kumasi in central Ghana, planting has been carried out in conjunction with 15 different schools and one university. Teachers are responsible for managing the sites, and run environmental clubs which use the woodlands for teaching and learning. Once the sites are established, schools are invited to apply for income-generating incentives such as beehives, fishponds or grasscutter (farmed bush-meat) projects.

In October 2013, journalist Helena Drysdale visited Ghana to see the sites for herself. Here is what she wrote:

Climate Stewards’ trees are growing at astonishing speed. At Adu Gyamfi Secondary School, Ofram planted in 2008 are 10 metres tall and form a proper rainforest. But they are dwarfed by the 20 metre Ofram trees at Asamama vocational school, and one Kapok that in five years has reached 25 metres, with huge buttress roots. Several years ago Asamama village was deserted, and some say the trees flourish because the land has been allowed to rest. Others attribute the soil’s fertility to the abandoned graves visible in the undergrowth. 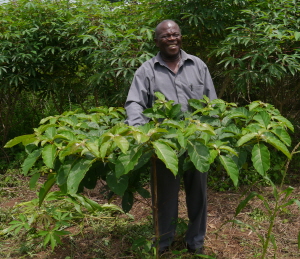 The success of school sites around Kumasi is also thanks to the commitment and inspiration of local co-ordinators. Mr Sackey, Nsutaman Catholic Senior High School’s Deputy Head, has encouraged students to get their hands dirty. Their 2008 Kapok plantation now forms a shady canopy full of butterflies and birds. Ofram seedlings planted in July 2013 are protected from sun by maize and cassava, which provide a cash crop for poorly paid school grounds staff. One 2012 Ofram plantation failed and will be replanted, largely because rain came late, a weather pattern Mr Sackey has observed over the last three years. This only boosts his passion. ‘The world is God’s creation,’ he says, ‘and we must work together to protect it, and prevent the climate from changing further.’ Although retiring in 2015, Mr Sackey has no intention of leaving the project, which he describes as his ‘fourth daughter’.

Paul Kingsley, agriculture teacher at Nyinahin Catholic Secondary School, is equally inspiring to his 200 A Rocha/Climate Stewards club members, who study agro-forestry and also the trees’ medicinal properties. First planted in 2007, the 12 hectares are already home to beaver-like ‘grass-cutters’ and antelope. Oil palms were planted to provide nutritious palm oil for the school kitchens, and students and teachers were trained in beekeeping with hives located in the shady new forest.

At Asamama, ex-headmaster Bernard Ampomsah has changed jobs but is nevertheless willing to travel every month for 10 hours by public transport to oversee the 13 hectares of Mahogany, Kapok, Kusia and Ofram.

Namong Senior High School’s 51 AR club members have been given cutlasses and are willing not only to plant but to weed their successful plantation of Ofram and Mahogany, not an easy job.

Anthony Boakye Ansah, 19, slashes grass with a lethal cutlass. He carves a path between trees at Nyinahin Catholic Secondary school, outside Kumasi in central Ghana. He and fifteen other pupils – all wielding cutlasses – have come to study nature not from books but on the ground. The twelve hectares of native kapok, ofram and two types of mahogany were planted by the school in 2007 with funding from Climate Stewards.

Anthony is President of his school’s 70-strong A Rocha club, set up to educate students about the environment, and to motivate them to get involved with the plantation on a practical level. According to Seth Appiah-Kubi, A Rocha Ghana’s Director, it is easy to get funding for planting, but after two years the seedlings are usually choked by weeds or accidentally burnt in bush fires, or felled for firewood, and all is lost. Climate Stewards, however, focuses on maintenance.

Anthony, who takes his Presidential role seriously, encourages club members to plant seedlings and use cutlasses to weed around them. ‘Seedlings need air and light,’ he says fiercely. ’Weeds will smother them.’ Guided by agriculture teacher and site co-ordinator Paul Kingsley, students then inter-plant in gaps, and continue to weed until a canopy has formed and the forest can look after itself.

It’s hard work but club members have learnt the value of trees, not only as a timber crop. They have handled varieties of native trees that they have never seen before, and have enjoyed watching them grow. Although only 4-5 years old, some are already 20 feet high.

Since 2007, Climate Stewards has worked with local farmers to plant 36 hectares of trees on five sites around Damongo and Larabanga, near Mole National Park in northern Ghana. These are cared for by members of the community who use the Taungya system of inter-cropping crops such as groundnuts, soya and melons (agushie) between young trees. In 2014, the first of these sites will be ready to leave in the care of the lcoal community, with trees stretching up to 7 metres in height, the tree canopy fully formed and no requirement for further weeding. 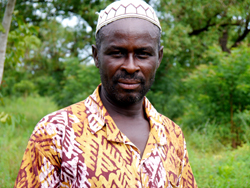 Zakariah Joe Abukari, known as Mr Joe, is site co-ordinator for the Climate Stewards sites around Damongo in northern Ghana. Each Climate Stewards site has a local site co-ordinator, a member of the local community or school staff who co-ordinates all the activities on the sites and ensures that the trees are well cared for. In exchange for a small allowance, he or she arranges for planting and weeding of the sites, creating all-important fire belts and advises local farmers on issues relating to the trees and their crops between the young trees. Keeping trees alive in this environment is not easy – elephants and cattle can trample the trees and eat underlying crops, there’s a danger of fire. ‘I’ve been here since day one,’ declares Mr Joe. ‘I like the trees and I see the benefit for our nation. I know it will take a long time – but there’s no food for the lazy man.’ 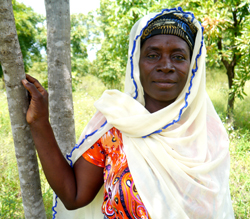 Afsha Alhadji Dramani, a farmer on a Climate Stewards tree-planting site at Larabanga in northern Ghana, stands proudly beneath her favourite tree. It is a native mahogany, growing on the one-acre plot amongst kapoks and dawadawa that Afsha herself planted in 2008. ‘I like this tree because it has grown so strong and tall, and because it has great medicinal qualities,’ she explains. ‘I chew the bark for my stomach.’

A Muslim, Afsha has seven children and is one of her husband’s two wives; he has 11 children in total. She was encouraged to get involved with the Climate Stewards project by being given free soya seeds to plant around the tree seedlings. What soya beans her family did not eat she could sell, helping to finance her children’s education. Although primary and junior education are free, she still has to pay for uniforms and books, and even for her children’s desks and chairs, while secondary education, at boarding school because there are no secondary schools in Larabanga, is expensive.

Now that the canopy has made it too shady to farm beneath the trees, she no longer gains financially, except from the income she earns for weeding around the trees, but she likes the cool shade on her land and is proud of what she has achieved. ‘If we were given support I would plant more trees,’ she says. ‘We have birds and butterflies. Before, the place was bare; now we have forest.’

How we use your money 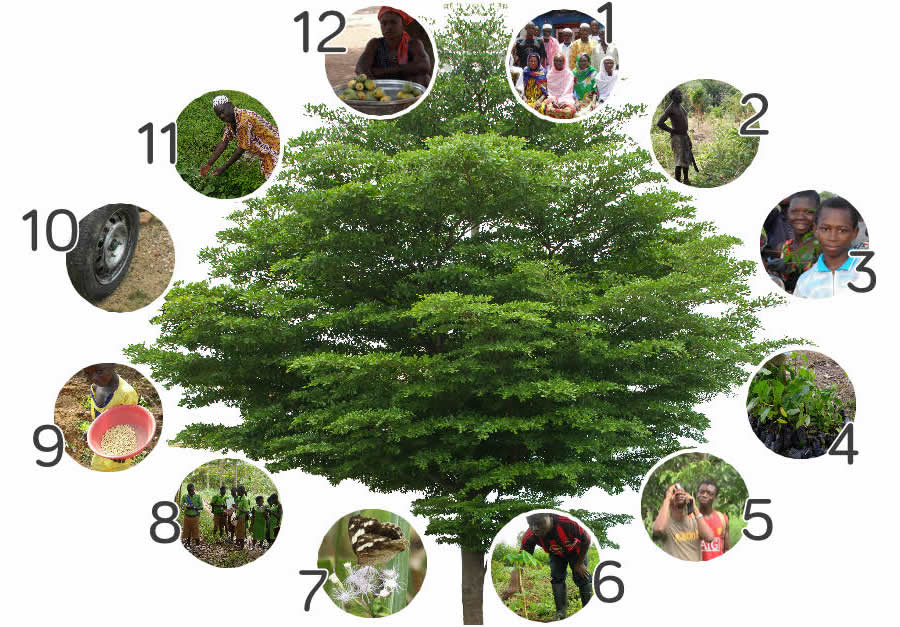